This past Fall, I enrolled in a British Literature course at school and enjoyed it immensely.  Part of our semester grade was a documented research paper.  I chose to do my paper on Sir Thomas Wyatt.  I am posting the entire contents of the research paper I wrote, as I think it has a lot of great insight to his work.  Enjoy! 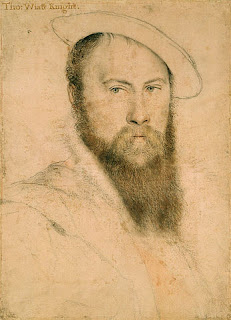 "A hand, that taught what might be said in rhyme;
That reft Chaucer the glory of his wit.
A mark, the which (unperfected for time)
Some may approach, but never none shall hit."